June 23, 2010
Had a great trip at the weekend there with a friend across to try sea kayaking out for real. Mark is from the borders and a 'canoe' man, I hope to get across and try a river trip at the end of the season with him.

Sunny and breezy so no midges and perfect for camping! We packed the kayaks and launched at Merkland to head up the coast, no rush, plenty of time to fish for some mackerel and play in the waves. 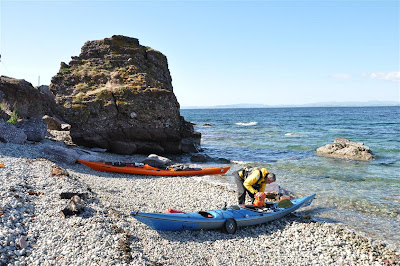 White water waves and strong sun left us enjoying the sea at its best. Stopped at North Glen Sannox for a lunch break as the tide reached its lowest and stood at the mouth of the river we where surprised to see Mullet just feet from us with there fins and tails breaking the surface in the shallow water. Plenty of birds where spotted on the shore as we passed by, Eider ducks with young, Cormorants diving and the Oyster Catchers patrolling the seas edge. The local Swan pair have 4 chicks this year, we kept well clear of these great birds though! 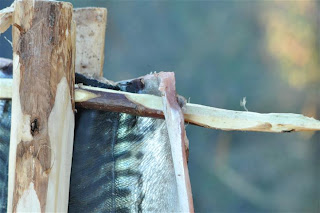 We stopped to pitch camp near Millstone Point on the North East corner of Arran, a good landing spot and flat area to camp seemed made for the job. Mark is real keen on bush craft camping and soon there was a good fire and the fish cooking. I busied myself with drying all the gear and set a line up with tow ropes and paddles to hang the paddle gear on.
Taking a look around there where lots of edible plants about with wild Thyme right at the shore side, Thistle and Burdock nearby and endless shellfish on the rocky shore. The beach is littered with dry firewood here and ideal for wilderness camping.
An interesting thing to note is a cave on the shore nearby that must get regular use with glass and clothes left inside, but with some clues that give away a much older connection to human habitation. Mark spent some time looking at the plants and ground around the entrance with a view to finding a midden heap, which he did, and identifying some of the plants and looking for water courses nearby. Everything indicates ancient use with Burdock just outside amongst other plants and an area of grass with lots of shells just underneath, a midden heap, and good water very near. It would be a guess, but probably used for thousands of years. 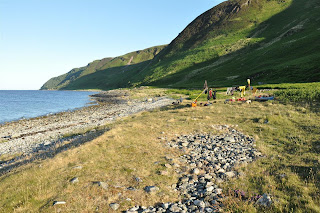 Later that night on a stroll along the shore to the Millstone Point we heard a series of scratching sounds from the undergrowth, we stopped and where soon given a great view of a badger foraging in the bracken. It was oblivious to us, about 20 yards away, as we stood downwind and we got to watch for a good while.
We carried on to Millstone Point, so called because this is one of the only places on Arran, that I know of, where millstones where cut. There is still the remains of a whole stone on the path there. The whole area up near Laggan was once very busy with a coal seam being worked and salt pans working for the Herring industry along with Laggan Cottage being a farm with stone walls running all over the hill. Further south an older settlement lies in ruin. 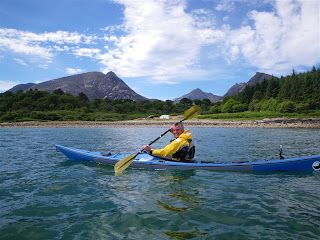 Next day we broke camp and headed down past Sannox and Corrie back to Brodick to finish the trip, surfing on the southbound waves the progress was fast and fun. The whole trip though only short and within the shores of Arran was a real treat. Arran has a lot to offer the adventurous traveller and when the weather is good why would you go anywhere else? Wildlife at every turn and the sea kayaks get you so close that sightings of otters and wild birds are regular and enjoyable.
Have heard the basking sharks are back and dolphins again cruise the Clyde.

Popular posts from this blog 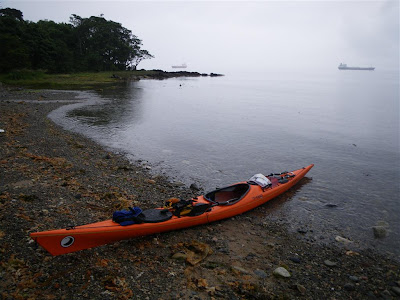 On Wednesday it rained, and it rained some more, then it rained again. I know because this was the first day of a 3 day trip from Arran up towards Bute, but by Thursday night the weather was just great and all was forgotten, the tent was dry again and watching the sun set over Kintyre made the journey work out fine. Funny thing our summer weather....... This was to be a trip with company but what with one thing and another it ended up just myself, we where going to do a round Arran trip but solo I could get in a journey that has taken my fancy for a while now. So on a rainy morning peering out over the Clyde with everything grey I hit the water at 9am with a rough plan to head up the coast and out across to Inchmarnock. With enough food and water for 3 days the boat was heavy, the forecast said improving to dry, hope so..... I launched at the north side of Brodick bay at the end of the road to my house, this was to be as simple a journey as possible with little costs. The firs
Read more 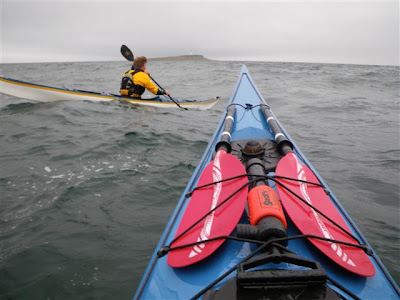 The weather forecast:    South East Force 6, heavy rain.            Work cancelled. Perfect! Grieg and I headed to Pladda for some gnarly paddle play. Not a force 6 to start, we launched at the Yellow Port out into 1m waves and surf and maybe a force 4.  Staying off to the west to keep out of the flat water downwind of the Island we moved south and then across the causeway around to the east side into sheltered seas. Great place to get in some rolling practice before heading out into the big seas at the exposed south side of Pladda . The south side of the Island is rocky and unforgiving in strong onshore winds, large breaking surf onto the rough shore leaves us with a sense of caution and awe. Not a place to go swimming. Reflected waves mix with the wind waves and the sea gets chaotic and big with the wind rising. 2m waves with some breaking tops give us a great thrilling time, try as I might the photos just don't do it justice. This was definitely the most intens
Read more